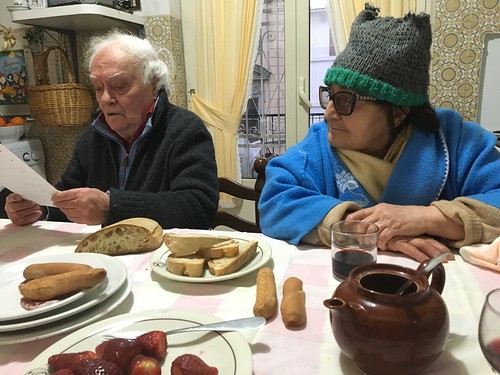 Roger:
Had our last breakfast at Danieli. Angelo checked us out of the Airbnb. We lucked out in that morning a transportation strike (sciopero) was beginning. There would be no subway, tram, or bus operation in Rome that day. We slowly made our way out of town eventually picking up speed on the way to Naples. The rush hour coming into Rome was grim. We only made two bathroom stops on the autostrada. The toll at the end was around 17 Euros. We stopped at the Navy base, did laundry and bought American wine for Maria. Checked into the Tennis Hotel. Had an issue in that I had requested a shower (doccia) and the room they were going to give us had a bathtub. Fortunately I knew the desk man and he switched us to a room with shower. After a brief nap off to Franco and Maria’s for an early (5 o’clock) dinner. We were supposed to meet them for late lunch at 4 but that did not happen. So they fed us later. Part of the reason for delay was a major accident on the highway. The navigation software did a great job of giving us a new route to the hotel and I believe we executed it with no recalculations.

More for 22 March
Earlier in the day outside of Danieli a woman was cleaning the sidewalk and there was a sign asking for donations. Showed this to Franco and he confirmed that this also happens in Naples. Maria made arancini and pork for our meal. In the one picture notice the TV. Valerie was not successful in convincing them that we drink our wine at home out of a water glass. So they got the good drinking glasses and we got wine glasses. Notice the no label wine bottles. The American wine which they drank was the only one with a label. The last picture was at the toll booth on the Tangenziale with a beggar.