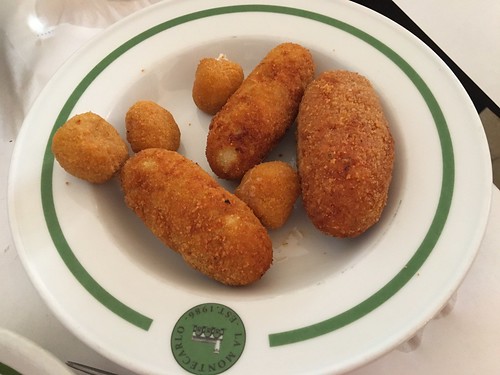 Valerie:
Another leisurely start to the day dictated by the fact that Roger doesn’t have the stamina to do something physical every hour of the day. If he would like to think that we aren’t eating breakfast until 8:30 because I am slow to get going, then I am OK with that.

Danieli
Back to apartment
Public transportation to Spanish Steps
Villa Borghese
A long, for Roger, painful walk, to the main street to get a taxi
Empty taxi…person is in the lavatory. So, ask another taxi to take us to lunch location. Too close to be worth his time and effort, so he says he is on break. Person comes back to empty taxi…younger woman, who doesn’t hesitate to take us to Via Alessandria location. Fare was 7.6, gave her 15. We were both very happy. Thank you!
Lunch at 1 pm at a quick food place. Not the best choice, since it was crazy with business people trying to get fed quickly, but an interesting experience. (Not to be repeated on purpose though).
Walked back to apartment.
Nap.
Computer time.
Leftovers for Roger.
Tram to Gelato shop.
Back to apartment and bed at 9 pm.

After breakfast at Danieli took the subway to Spanish Steps. We would have taken the Linea B from Policlinico to Termini and then transferred to the A line to Spagna station. Is during the transfer when encountered the guy breaking the glass? Coming out of the station Valerie paid a beggar a Euro to pet his dog. Unknown if that was a fair price. We walked out into Piazza di Spagna which was very crowded. After the fact was made aware the Keats-Shelley House was here. Began the ascent up the steps with the ultimate goal of reaching Villa Borghese Park and PasseggiatadelPincio. Had to stop twice to rest. At the top saw a subway entrance. Possibly there was an escalator in the subway station we could have taken to Trinitadei Monti. We saw a modeling shoot on a wall. Very slowly we made our way to the Borghese. We wondered around the area. I really do not know if we made our objective. There were youth groups singing in the park. Eventually made our way out of the park to find a taxi. The first cab we encountered was empty. Did we flag down the woman driver? Took the cab to the restaurant Pronto Pizza e Cucina that had fried food. I believe we mailed the postcards that never arrived. We ordered a selection of fried food at the restaurant. Then all hell broke loose. Evidently this place is frequented by office workers and they descended on the place. It was full. They must use the honor system because it was not clear to me how the bills were paid by the groups. Valerie paid our bill. Would not go back for noon meal Monday thru Friday. Walked back to the apartment for nap time. That night we had leftovers and then went out for ice cream. Took the trolley up the street to a different ice cream shop. We liked it better as they had toppings. There are many orange trees in Rome. The fruit seems to be damaged by the recent snow. Walked up to take the trolley back to Piazza Galeno. No trolley came so we walked back to the apartment. In Piazza Galeno we observed all the trolleys making U turns.