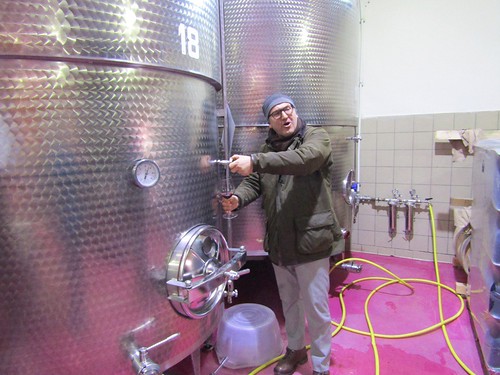 Our goal today was the winery Masseria Frattasi in Montesarchio. I picked this winery because the award winning whites (Falanghina) they make. To get there would require dealing with the morning rush hour going east on the Tangenziale, which was always slow until you got to the Corso Malta exit. Once past that, you pretty much do the speed limit. We were a little late for our appointment with Pasquale Clemente, due to a few recalculations. Also, on one of self-imposed detours, we encountered a road blocked by strikers [V: further adding to Roger’s frustration]. The police were at the scene, and we were turned around. Our late arrival was not an issue as Mr. Clemente was also late.

The winery dog initially greeted us. An employee (Anna?) tried to keep us entertain until he arrived. First she showed Valerie the bathroom. I wanted to sample the 2016 Falanghina. Using a ladder she went and retrieved a bottle from a tall stack. At one point we had three bottles open, at which time Mr. Clemente arrived.

He was very engaging, and I would characterize him as an environmentalist. He prefers using cork over plastic. The whites had 13-14% alcohol. After I asked about the 2017 harvest, he drew a glass of red from a nearby steel vat. For being a very young wine, it did not have a lot of tannin. I do not remember what he said about the future possibilities for that particular wine. If we came back another time, Pasquale offered to show us the mountain vineyards, which currently had snow. My interest was when they picked the mountain grapes they hang them to dry for some period of time before crushing. We bought some wine, and we were on our way. It was not until I audited the tab back at the hotel that I realized the tasting was 44 Euros. He did box up the three bottles that we tasted. Gave those bottles to Franco and Maria. On the way back stopped at a hole-in-the-all for arancini to go. Made another stop at the naval base for cash, and purchased ceramic street numbers.

Back at the hotel – nap time.

Evening meal (Abraxas Osteria) was out in the suburbs. We missed the turnoff and due to the road being narrow, we had to drive some distance to find a turn around. Coming back, we made the turn too early and had to back around to get going in the correct direction. Finally made the correct turn and drove up a single lane road to the restaurant. Then I was given grief from the parking lot guy for parking too far from the adjacent vehicle, so Valerie re-parked the car to his satisfaction [V: Only after I had to be reminded how to get the car into reverse].

We finally make it to the table. Valerie was enamored with the art work behind me. We started with an appetizer plate. Then pasta. Valerie thought her ravioli delplin was so-so. I had a Naples favorite pasta alla Genovese. For the final course Valerie had Kobe beef hamburger with potatoes and I had sausage and friarielli. When we arrived, the restaurant was empty. When we left, the place was full. What was interesting were the families with young children arriving in the 9 o’clock hour. Passed on dessert.

Started the car and the sensor buzzer came on indicating something nearby. Valerie’s park job. Backed out slowly and made our way down hill. On the drive down the hill to the road we encountered a car coming up. Ducked into a driveway. Took a little bit of maneuvering to get back on the down hill. After we got onto the road I thought it would be smooth sailing, but the on ramp to the Tangenziale was closed, so we did some recalculation. We made it back to the hotel. Valerie says she has no desire to visit that restaurant again. Plenty of other choices [V: easier to get to, and with better food].