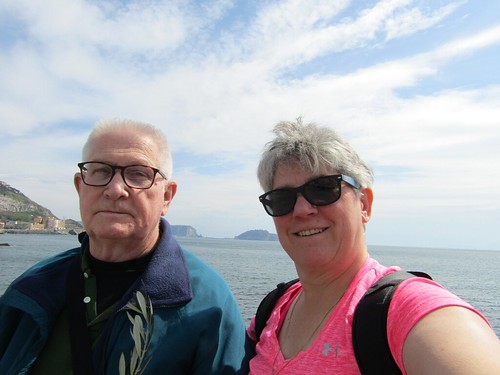 Roger:
Palm Sunday
Valerie wanted to eat seafood. Online I found a seafood restaurant (La Pulperia) in Pozzuoli. Pozzuoli is one of the big entry points for seafood in the Naples area. I thought the drive would be uneventful but I would be wrong. Come to find out Valerie was using her guidance system and the car’s guidance system was also running. I was getting conflicting commands. At one point Valerie was telling me we could not get there from here even though I could see the Bay of Naples. Once we got down to one navigation system we made it to the restaurant. There were no legal parking spots available so Valerie allowed me to be Italian and I parked the car. We were the first customer in the restaurant (typical) so Valerie had the pick of the tables. She picked one with a nice view. We could see families returning from church carrying their palm branches. It was a beautiful day to be out. The restaurant toilet had no seat but they used colorful tiles on the floor and wall. Had a pricey (47 Euros) bottle of white wine. I had one dish the seafood soup. I liked it. If I had it again would tell them to forget the snails. Too much work to get the snail meat out. Valerie started with a plate of three items (meatball, arancini, and seafood stuffed in a pastry). She was not excited with the stuffed pastry. Then she had a risotto di mare. No dessert.

Was going to walk to a nearby tourist attraction but I ran out of steam and we walked back to the car. We encountered a family with a Beagle. Valerie and them compared notes about Beagles. I believe they were impressed that Pepper always comes home when she is out running free. I did not tell them the problems I have getting here hooked up when I believe we are finished at the dog park. For some reason no picture of the Beagle. Next part of that day’s adventure was watching this guy park cars in the municipal parking lot. For money and the car keys he would allow them to double park their car and then move the cars when the people who owned the blocked cars returned. There seemed to be action all over the parking lot. Years ago in Naples they had white hats that performed this function. Unknown whatever happened to the white hats.

Back to the hotel and Valerie sat outside working on orienteering results. When I came out to shoot the picture some guy was bending Valerie’s ear about pickel ball and the game came from Argentina.

That night we went to our nearby dive (Rosso Sapore). I had ainsalatacaprese and half a ripieno (calzone) pizza. Valerie had arancini and the other half of my pizza. There was salame and ricotta inside the ripieno. Parking at night in the lot at Rosso Sapore was a challenge. Would have Valerie get out and guide me into a parking spot. Nothing was stripped. It was free form parking.