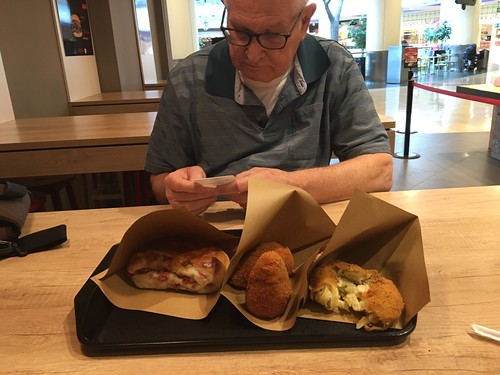 Valerie:
Off to Caserta to check out the castle. The drive alone was enough for Roger, so we headed to the nearby mall for lunch and gelato. “Street” food for lunch. The rice ball had too much meat in it, where I prefer them to be a less savory. The gelato place had 72 different flavors. I had Mars bar and another flavor, though the Limone looked delicious. They actually had two different lemon flavors. Sort of wished I had been a piggy and gone back for more.

After a stop at the navy base, we headed back to the hotel for a nap. Then, it was back to the local pizza place for a folded pizza and beer. No rice balls this evening. Eating in the pizza place is like eating with a big, noisy, family. It was quite entertaining.

The hot water situation at the hotel fascinates me. It pours out everywhere, and Roger says it has been that way for years. I sure hope it is being recycled or something.

Roger:
Off to Caserta for Valerie to run an orienteering course that had previously been used. The drive was normal. Stop and go traffic on the Tangenziale until we got to the Corso Malta exit. The fun began in Caserta as we tried to get to a spot near the Royal Palace. The entrances to the grounds where the orienteering event was held were closed. Possibly elaborate on this. We scratched the idea of orienteering and went to the mall. We got a trey of food and beverage at Frittoline for ten Euros. Then we stopped for ice cream at La Scimmietta. Valerie got something at the Carrefour grocery store. Then returned to Napoli. That night went to our neighborhood dive for dinner. Valerie assisted me in parking the car. The parking at Rosso Sapore always seemed to be a challenge. I always want to park in such a way that no one can block me and that I do not block them.