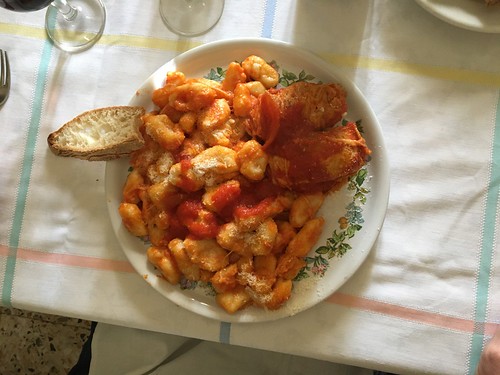 Roger:
Drove to an area of Naples called Spaca. The car guidance system did not take into consideration there was some street work that blocked us but we eventually made it to Via Duomo and found a legal parking spot. A beggar gave me hand signals to assist in backing into the space. Valerie gave him a Euro for his assistance. First stop was the church that is big time for San Gennaro the saint of Napoli. Valerie found the pay toilet. Next stop was nearby in Via Tribunali and see Christmas scenes. Bought nothing. Valerie took a picture with Pulcinella. Did come across a place that makes ten types of frittate (street food). Took away the menu which showed a second shop near Franco and Maria’s. Returned to the car and Valerie gave the beggar another Euro for watching the car. Sunday we would see the parking maneuvers on a grander scale.
Over the years we have had many meals and hospitality from Franco and Maria. We decided to buy them a flat screen TV. They had a small tube TV with a converter box. We found an appliance store near their home that had client parking. In the parking lot I almost ran over one of the parking lot attendants. The parking was cramped and they parked the car for me. The purchase was painless. Interesting the dimensions of the screens were in inches. If you ever need a TV while in Naples Dino Galiano is the place with a large selection and easy parking. Valerie was looking for the bathroom in the store. Come to find out it was off the parking lot so she made a pit stop while I found the car. We drove to Franco and Maria’s and parked the car on the sidewalk. Boris, the neighborhood German Shepard, barked at us. We walked up the hill to Pasticceria Albino. This is maybe not the best bakery in the area but several years ago the owner’s elementary age daughter who was learning English assisted me with my purchases. So I always go back. Today her mother assisted us and we made it through without English. The purchase cost 10.80. Valerie gave the lady a 20 Euro note not understanding the importance of change in Italy. When she gave the lady a one Euro coin to go with the 20 things went better. As a side bar we used the toll machines on the A56 (Tangenziale) for change. Put a 10 Euro note in the machine and get coins for the change. Of course if I did not have the car near the machine I would have problems retrieving the coins from the hopper.

We tried to find the second frittate place. I ran out of gas so Valerie walked to the address. The location was still under renovation for opening. We walked back to Franco and Maria’s. Valerie got the flat screen out of the car. Valerie and Franco setup the new TV. It did not require the converter box and had high definition channels. While all the channels were available there was some issue with the numbering.
For lunch we had a huge plate of gnocchi to start. Then sausage and friarielli. Had a great local wine. The bottle had no label. It cost Franco a little under two euros a bottle. Two buck Chuck? Finish the meal with the sweets we had purchased and Maria made me a caffe.

Back to the hotel for a nap.

That night we went to a nearby dive for insalatacaprese, arancini (rice balls), and beer. By the way, in Rome the rice balls are called suppli.