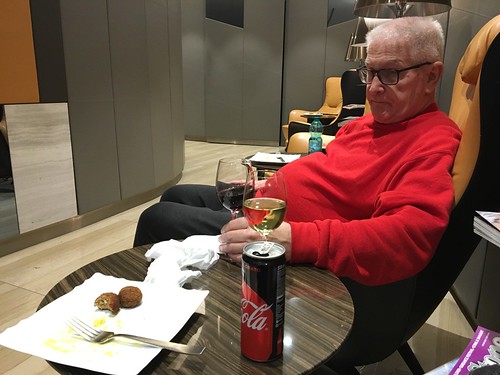 Roger:
When we checked out of the hotel the clerk said the beach water in Ostia-Fiumicino area is not very good. I wonder what the locals do in the summer? We gassed up the rental car on the way to the airport. We found the Hertz drop off building the first time around the airport complex. The inspection of the car found no issues. Now we just wait 2-4 months to see if there are any traffic tickets. [Valerie: As of June 30, we received two traffic ticket notices, one from Rome the first day, and one from the Saturday in Naples.]

There were two luggage carts nearby that we used to slept our luggage into the terminal. I believe we were the third building from the terminal so there was a walk. The Air Canada check-in was some distance from where we entered the terminal. Fortunately Valerie had scored us an upgrade for the return flight so our line was very short. Another benefit was it got us into the Fast Track lane at security which proved to be a painless process. After clearing customs control we had a train ride and a long walk to gate 41 and the Alitalia lounge. I ate and drank too much. When we got on the plane the cabin steward was surprised that all I wanted was a ginger ale. I binge watched a Canadian TV show Kim’s Convenience. Arrived in Toronto the only issue clearing customs was we somehow missed step 2. We had access to the Maple Leaf lounge. I do not believe it was good as Alitalia. Our flight was late coming out of Canada but I was still in bed by 11:45 PM. Long day.